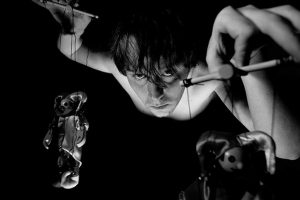 We humans are fundamentally powerless. That means you. The world is not your puppet. You can’t control what goes on, what people do, certainly not what people think. But you do try, if only in your mind. We all do.

We expect people and circumstances to change. We worry about who likes us and who doesn’t and why and what to do about it. We rail against death and taxes and bad drivers and our own bodies. As if we can make people like us or make them change their minds or their hearts or their bad behavior. As if death and taxes and bad drivers will wither and disappear before our curses. As if we will wake up one day perfectly photoshopped.

When you do this day in and day out, it starts to hurt. And nothing—not drugs, not cake, not new shoes—can soothe the deepening sense of frustration and disappointment for more than a short time. After which you find yourself worse off than before. More strung out, heavier, more in debt. Craving, seething, ashamed, helpless . . .

The solution is to really, really understand—and then start living—another fundamental: what you can control is yourself. Your mind and your actions. And that is powerful.

The Insanity Starts with Emotional Dependency

But let’s back up for a moment. Where does this impulse to control come from? As Dr. Brown describes in Addiction Is the Symptom, emotional dependency is at the bottom of it all.

Emotional dependency is deeply conditioned in childhood, and most of us get a dose of it. To varying degrees, we never learn to meet our own emotional and spiritual needs. Instead, we’re trained to be dependent on other people, on anything outside ourselves, to get them met.

Control Starts Below Your Awareness

It starts in your mind . . . the churning, the strategizing. Soon you are actively trying to control and manipulate the person, the situation, the thing. All of it is addictive behavior. And you may not be aware of any of it.

Domestic violence, for example, is an extreme attempt to control and manipulate another human being. Lying is a subtle one. As is being a pleaser, saying yes when you want to say no and vice versa. Many of us tie ourselves in knots trying to make sure everyone likes us, so dependent are we on that affirmation of our worth. And what is perfectionism but fear of not being liked, not being good enough?

You try to control it all. You fail. You self-medicate. Addiction on top of addiction. Around and around you go, in a downward spiral at worst, like a hamster in a wheel at best. You just don’t know another way to be.

There is a another way to be. It’s called free. And you can learn it.

Put Your Power Back Where It Belongs

For anyone unfamiliar with the Twelve Steps, the first is “We admitted we were powerless over alcohol, that our lives had become unmanageable.” But the real first step out of the vicious circle of control, as Dr. Brown writes, is to recognize your powerlessness over all of life, not just your drug of choice. In other words, to accept reality.

In this respect, the original Twelve Steps set you up for failure. You’re focused on the symptom—“powerless over X”—not the underlying control issues. You never address the real problem. So you relapse, if not with your drug of choice, with a substitute. Maybe you drift from one twelve-step program to another as new symptoms of the addiction to control pop up, in a high-stakes game of whack-a-mole. It’s common to replace alcohol with sugar, for example. AA, OA . . . What’s the difference? A letter. That’s all.

I am powerless over all of life, and my life and my mind are unmanageable when I try to control any part of it.

Once you recognize this powerlessness, you’ve taken the first step toward personal power, self-control, and healthy independence. Meaning that Step One, practiced in this way, is the beginning of the end of emotional dependency. And thereby of addictive behavior.

The Brown Method, through the details of your own life experience, systematically and thoroughly wakes you up to just how much power you’ve been giving away to the illusion of control every single day. The life you’ve had and the life you’re going to have suddenly look a lot different.

Do you hear that big sucking sound? It’s the power, the lifetime of mental and emotional energy, that you’ve scattered far and wide by trying to control everyone and everything . . . coming home to fill the void inside you.

Just think: What might you do with all that?