A lie is an addiction alarm bell. Once you learn to hear it 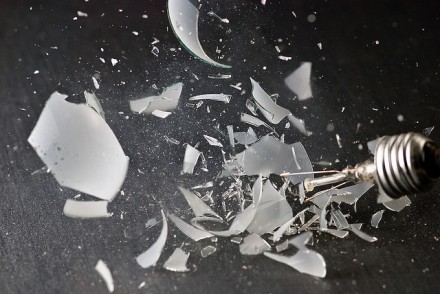 In Addiction Is the Symptom, Dr. Brown talks at length about lying and honesty. Because lying is an addictive behavior.

The next time you tell even a small a lie, try to get yourself to stop and think about it. You will likely find that you are afraid or trying to control someone or something. Fear, control, and manipulation: these characterize all addictive behaviors, which in turn are symptomatic of the real problem: emotional dependency. “We are honest in direct ratio to our self-reliance,” Dr. Brown says over and over.

I can tell you the exact moment that I really got this.

One Bulb Breaks, Another Goes On

I was at my favorite library—the beautiful Forbes in Northampton, MA—so I could focus on Addiction Is the Symptom, although we weren’t calling it that yet. There I was back in the second-floor stacks, shuffling through my notes while my laptop booted up. As I settled in, I found that the wall lamp was throwing light in my eyes (I’m kind of short). With no switch in sight, I decided to simply unscrew the bulb.

The bulb was really in there. I cranked it a just little harder . . . and it broke. Shards of glass and invisible bits of mercury scattered across the desk. I would have to tell someone.

Immediately, automatically, my mind got busy on a story about how the bulb had broken, something that would make me look less bad. I shouldn’t have messed with that bulb.

Almost as quickly, I nearly burst out laughing. Oh my god! I was sitting here writing a book about healing addiction, and I had engaged in addictive behavior by spinning a lie!

The chain was so clear: Why did I want to lie? Because I was afraid. Of what, exactly, besides adding even more mercury to the pile I’d stored up before I broke my tuna habit? I was afraid of looking bad. Afraid of a complete stranger’s disapproval. I was emotionally dependent on others’ opinions of me—imagined opinions no less. And so I was going to manipulate an unsuspecting librarian with a lie.

My internal process was the same as that of someone hooked on heroin who fears she can’t live without it and will lie to get it.

All this over a lightbulb! I saw how deep emotional dependency runs, how insidiously it deforms our minds and our lives. Before writing Addiction Is the Symptom with Dr. B, I would have had zero awareness of what I had just done.

The degree to which you lie and the degree to which you are emotionally dependent (read addicted) are directly related. You live in fear of losing whatever it is outside yourself that you think you need, whether thing or activity or person. You may live in fear that someone will realize how much you need it, how bad off you are. How bad you are. And perhaps in even greater fear that you yourself will realize it. So you lie, to yourself as much as to others.

You make up a story to explain why you didn’t do something, when you just plain forgot. You say yes when you really want to say no, or vice versa. Someone asks, Are you hung over? And you say, Oh, I just stayed up crazy late streaming Netflix. Were you shopping again? No, no, that’s an old bag. Where’s that cake? Trash. There was mold on it. Did he hit you? It’s so stupid, I tripped on the rug and went right into the wall.

A lie is an alarm bell. After doing the step work outlined in Addiction Is the Symptom, even the little ones clang in your head, because you are awake.

Back to my lightbulb. It did not matter what the librarian thought. Nor could I know or control that. And in any case I was not a bad person. A hundred broken lightbulbs would not make it so. Nor, on some other day or in some other life, would any number of drinks or cake binges or shopping sprees or fists in my face or needles full of heroin.

I marched over to the nearest librarian and cheerfully told the truth. “Sorry,” I said. As you can guess, the librarian did not fly into a rage, breathe fire, and incinerate me where I stood. “Oh,” he said. “I’ll send over a custodian.” The custodian was very nice. We chatted as he swept up my mess.

And then I went back to work, with a greater understanding of what I was working on and why it mattered to me and to everyone else who might read it.